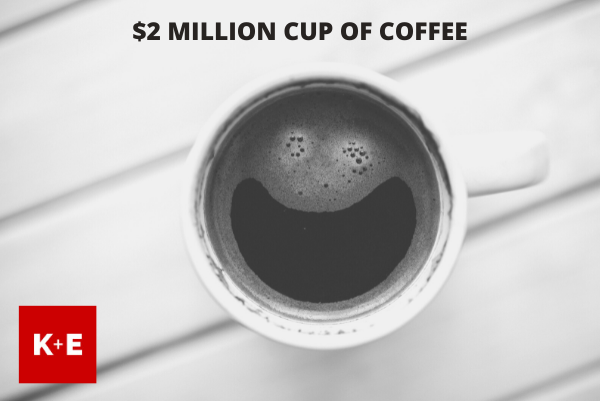 BRIEF OVERVIEW OF THE $2 MILLION CUP OF COFFEE VIDEO

A very practical budget and finance video taught by Kirk Elliott PhD. Dr. Kirk will be going over ideas and strategies for budgeting, living within your means, and getting out of debt. Wait until you hear about the $2 million cup of coffee!

WHAT EXACTLY IS THE $2 MILLION CUP OF COFFEE?

On May 28th, 2014 there was an article on Bustle.com reporting how Starbucks baristas had served the most expensive drink ever.  It’s called the Sexagintuple Vanilla Bean Mocha Frappucchino, and it’s pretty much death in a glass. A 128-ounce glass with 60 shots of espresso and costs a whopping $54.75!  So this got me thinking, not only is this DEATH IN A GLASS, it is also DEATH TO YOUR RETIREMENT PORTFOLIO!

In 1996 Thomas J. Stanley and William D. Danko wrote a book called, “The Millionaire Next Door.”  They described the surprising secrets of America’s wealthy.  What are just a few of the characteristics they talked about?

In a nutshell, they are not flashy.  They live below their means, they work hard, are very entrepreneurial, and they save and invest what they don’t spend.

GETTING BACK TO THE COFFEE

So, let’s get back to the coffee.  I know a person who would go to the coffee shop every day and get a frappaccino.  Let’s not be ridiculous with the $54.75 frappaccino.  Just a basic frap is $4.25.  If my friend would  invest that $4.25 instead of drinking it the results would be AMAZING!  From age 20 to 65 (when most people want to retire), investing $4.25 Monday through Friday instead of drinking it, and having that grow at 15% annually, my friend could accumulate a lot of money.  Let’s do the math.

WHAT IF SHE CUT THAT OUT AND INVESTED IT?  As we learned in previous lessons, there is a time and place for everything.  A buy and hold forever strategy is a foolish allocation.  Day trading is also foolish.  But, IF YOU ARE A STUDENT OF HISTORY and a STUDENT OF THE MARKETS you can identify the major trends and take advantage of them so those trends don’t take advantage of you.

In working trough this example, let’s assume a 12% annual growth rate on your investments.  Why 12%?  Isn’t that kind of high?  Well, let’s look at the trends:

So, by understanding the trends, allocating into the right place at the right time, 12% per year all of the sudden doesn’t seem outrageous, but actually quite a reasonable expectation over time with a properly diversified portfolio that maximizes your return and minimizes your risk.

A LIFETIME OF BAD DECISIONS IS DEVASTATING

NOT EVEN CLOSE!  At age 65, not adjusting for inflation she would have $2,026,073.94.  YIKES!  Not only will the cup of joe with 60 shots of espresso probably kill you, but going out for coffee every day should have just made you sick!  $2 MILLION DOLLARS is what those cups of coffee cost.

In economic terms this is called the opportunity cost, or the best forgone alternative if you would have done something else with your money.

Now, replace my friend with you.  Imagine how much you could have if you cut your cable TV package from the highest to the lowest package.  Instead of eating out once per week you went out once per month.  Instead of going to a movie you rented one.  Examine your life.  Just think of all the things you could cut out.  I’m not suggesting you cut out everything.  STILL HAVE FUN AND ENJOY LIFE!  But, if you invested what you cut out into the right places at the right time, all of the sudden your retirement could look AMAZING instead of something to fear and lose sleep over.

THREE STRATEGIES FOR A PROSPEROUS RETIREMENT

In closing, here are 3 strategies for a prosperous retirement while still enjoying life now!

Discuss this blog with your family over dinner.  The future could be AMAZING if you follow these steps. 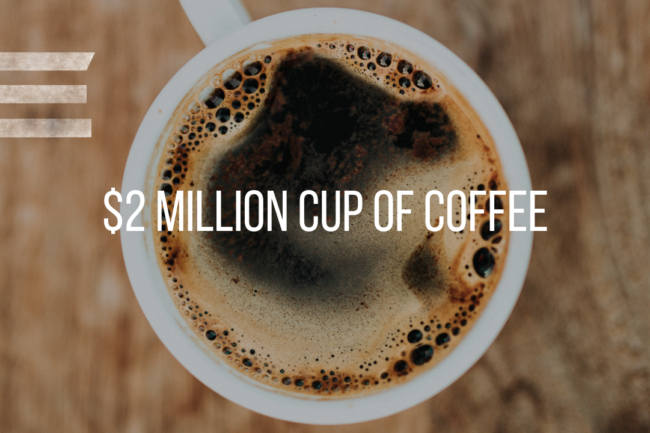 SIGNS AND SIGNALS OF THE GLOBAL FINANCIAL RESET