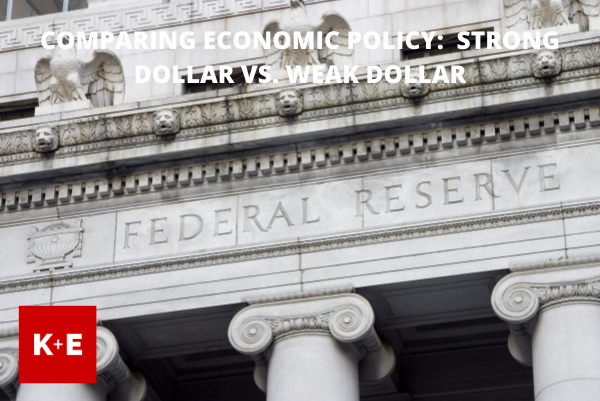 America has had a strong dollar since the Clinton administration

During the Clinton, Bush and Obama administrations, the strong U.S. Dollar caused imports to America to be less expensive. Therefore, American’s purchased more imports and we exported. Since American’s purchased more foreign goods JOBS had to go to the places that were manufacturing those goods. Therefore, a strong dollar brought deflation in prices as we imported cheap goods, but we also exported jobs overseas.

How does he want to accomplish this?

IS A STRONG DOLLAR ANTI-JOB?

This is a tough question. A strong dollar means that the currency purchases MORE foreign goods for less cost, and Americans are consumers! A strong U.S. Dollar makes consumers happy. However, when jobs follow manufacturing, a strong U.S. Dollar will export jobs to the countries that are manufacturing. Fewer American jobs means that fewer people are working, spending money, paying taxes, or generating revenue for American companies and the government.

WHAT COMES WITH A WEAK DOLLAR?

These two go hand in hand. A weak dollar means fewer around the world want to invest in it. So, to entice investment in US treasuries, higher interest rates are required. The weaker US Dollar means prices will rise on imported goods and a shift in consumer behavior won’t happen quickly, thus inflation is coming!

TRUMP INHERITED A COUNTRY THAT IS IN DEBT UP TO ITS EYEBALLS!

One of the effects of a weak dollar is rising interest rates to slow down inflation. This will prove to be problematic as America is in debt up to its eyeballs!

WHAT HAPPENS WHEN INTEREST RATES RISE?

CAN A PRESIDENT CHANGE ALL OF THIS?

HOW TO BEAT INFLATION